The Miracle of CPAP 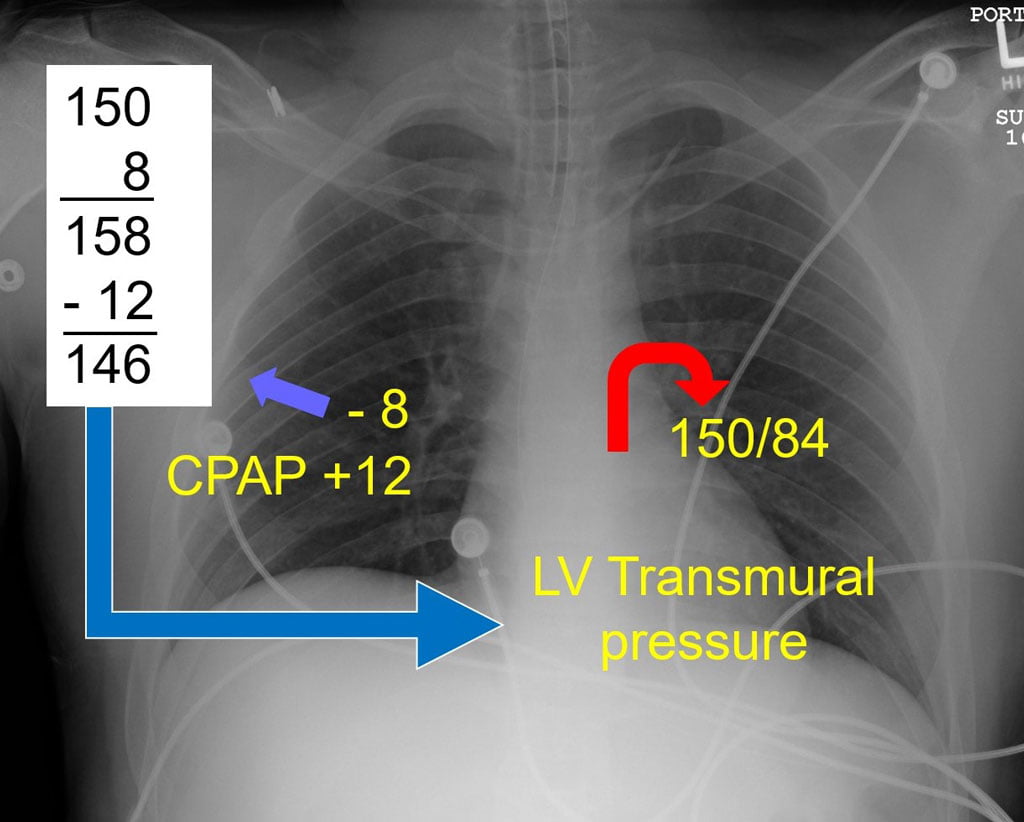 EMS protocols suggest continuous positive airway pressure (CPAP) for a wide range of conditions associated with acute shortness of breath (SOB). The mechanisms by which CPAP provides relief are complex and require an understanding of pulmonary physiology.

Formally named in 1971, CPAP found a niche in neonatal ICUs, supporting premature newborns with respiratory distress resulting from underdeveloped lungs. Ten years later, it was tried experimentally in adults with obstructive sleep apnea (OSA). Today, CPAP is the primary therapy for both conditions and its use has expanded into emergency treatment of acute pulmonary edema plus a wide variety of clinical conditions associated with acute SOB.

The physiologic action of CPAP is application of continuous positive pressure to the upper airway, measured in centimeters of water pressure (CWP). The, “continuous” aspect of CPAP means that the pressure remains the same regardless of whether the patient is inspiring or expiring. Intuitively, one would think that applying pressure to the airway during expiration would increase work of breathing (WOB) and indeed, it does. The degree to which CPAP increases the work of exhalation depends on the pressure being used. Despite the slightly increased work needed to breathe against CPAP during exhalation, the overall effect of CPAP is a significantly decreased WOB owing to its benefits during inspiration and on the airways themselves.

In premature newborns, respiratory distress results from insufficient production of surfactant, a complex mix of carbohydrates, lipids and proteins normally made in the lungs. Surfactant acts to prevent collapse of the alveoli at end expiration. Without sufficient surfactant, alveolar collapse leads to significant atelectasis since collapsed alveoli tend not to reopen during inhalation. The pressure of CPAP at the end of the respiratory cycle prevents complete deflation and therefore, collapse (at end expiration), of the alveoli. CPAP pressures during inspiration reduce the effort expended by the newborn to inhale. This physiology is relatively straightforward and easily understood.

In OSA, the primary cause of apnea is displacement of the tongue into the back of the airway, resulting in obstruction that the patient is unable to overcome during inhalation. Snoring is the classic symptom of mechanical airway obstruction by the tongue, usually resolved by repositioning the head or placement of an oral or nasal airway. The obstruction seen in sleep apnea progresses beyond snoring to complete airway obstruction, preventing any inhalation. The continuous pressure of CPAP effectively “splints” the airway in an open position, preventing the tongue from completely occluding the airway. The concept of CPAP for treatment of OSA is also relatively straightforward.

Acute pulmonary edema (APE) offers one of the most dramatic, immediate, and effective applications for CPAP. APE can result from a variety of conditions but is most commonly associated with right heart failure (usually following left heart failure). This heart failure leads to significantly elevated pulmonary vascular pressures, causing fluid to leak from the pulmonary vessels into the airways. The accumulation of fluid often occurs quickly, is described commonly as “flash” pulmonary edema, and quickly fills the terminal airways with pulmonary vascular fluid. CPAP provides a number of benefits in APE, the most important of which usually occur less within the first minute following application.

Firstly, in APE, the continuous pressure of CPAP works to prevent additional leakage of fluid from the pulmonary vessels into the airways by creating a positive pressure gradient.  It is theorized, although not yet proven, that CPAP may force fluids congesting the lower airways back into the pulmonary blood vessels. At minimum, CPAP works to “splint” the lower airways open, preventing collapse in fluid filled airways. Secondly, and probably the most difficult to understand, CPAP results in a significant reduction in transpulmonary pressure, or the pressure needed inside the chest to draw air into the lungs. In a healthy individual, transpulmonary pressures of -1 or -2 CWP are usually sufficient to draw air into the lungs. With significant obstruction from fluids, secretions, mucus plugs or bronchial spasm, pressures as high as -8 CWP may be needed to draw a breath. Such negative pressures often produce the clinical finding of retractions in the chest musculature.

In APE, the left ventricle is often ejecting against a high afterload. This elevated blood pressure, added to a high transpulmonary pressure, is the root cause of pulmonary edema: the heart simply cannot overcome the resistance it is trying to eject against. CPAP directly lowers transpulmonary pressures, as seen in the accompanying illustration. The seemingly small reduction in transpulmonary pressure achieved with CPAP is such a powerful afterload reducer that most APE patients improve within seconds following application. The additional combined effects of improving oxygenation through oxygen delivered with continuous positive pressure and splinting open terminal airways adds to clinical improvement.

While we have little evidence to prove how CPAP works in the many other acute difficulty breathing cases, the physiology described here offers very likely explanations for the benefits that patient’s often experience.

When CPAP Is Not Working
Increasing Intubation First-Attempt Success Rates in Patients of All Ages
Demystifying Ventilator Modes: It’s Not That Complicated!

Mike McEvoy, PhD, NRP, RN, CCRN, is the EMS coordinator for Saratoga County, New York, and the professional development coordinator for Clifton Park and Halfmoon Ambulance. He is a nurse clinician in the adult and pediatric cardiac surgery intensive care units at Albany Medical Center, where he also teaches critical care medicine. McEvoy is the chief medical officer and firefighter/paramedic for West Crescent Fire Department in Clifton, New York. He is also the chair of the EMS Section board of directors for the International Association of Fire Chiefs and a member of the New York State Governor’s EMS Advisory Council. He is a lead author of the textbook Critical Care Transport, the “Informed” Pocket References (Jones & Bartlett), and the American Academy of Pediatrics textbook Pediatric Education for Prehospital Professionals (PEPP).

Since CPAP seems to work so well, would BiPAP (if available) have any advantages in prehospital settings?

BiPAP has unique advantages (and some downsides). It’s primary use is for respiratory failure associated with hypercarbia. Look for an upcoming article on BiPAP.