CPAP: From the Beginning Until Now 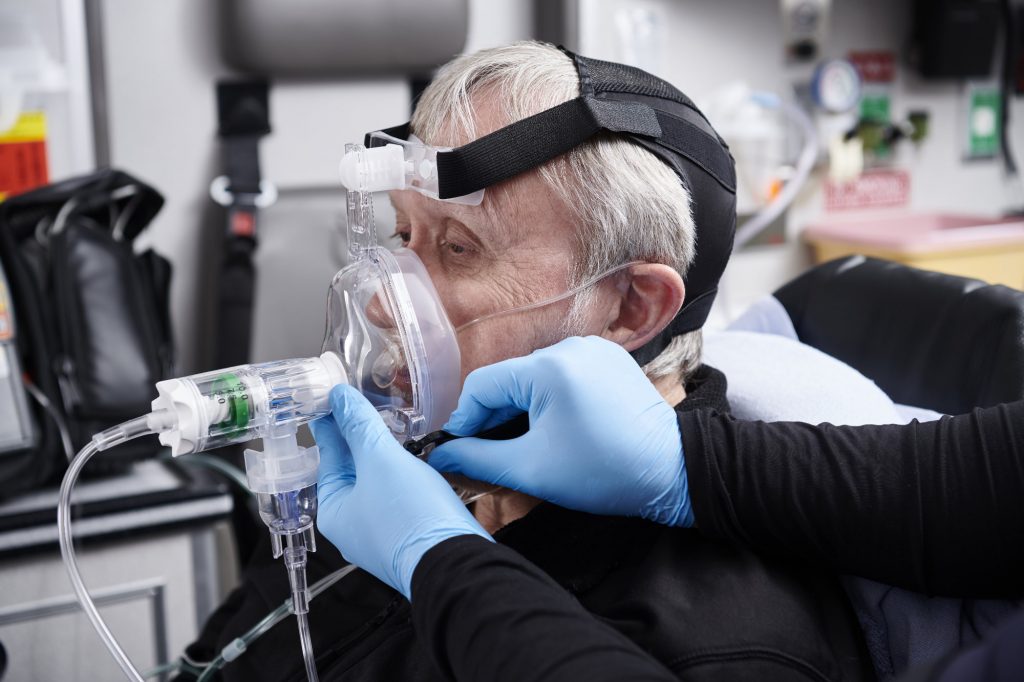 Although originally intended to treat prehospital patients in pulmonary edema resulting from heart failure, CPAP is now indicated for virtually any condition resulting in significant dyspnea accompanied by signs and symptoms of increased work of breathing. Photo courtesy Pulmodyne

Continuous positive airway pressure (CPAP) dates back to the early 1900s but only recently became commonplace in prehospital care. Iterations of CPAP were seen as early as 1912 when continuous positive pressure was trialed during thoracic surgery cases to prevent post-operative atelectasis.

In 1937, a form of CPAP was tested to prevent altitude-induced hypoxia in jet fighter pilots.

Between 1950 and 1967, the concept of CPAP evolved into intermittent positive pressure breathing (IPPB), which was used to treat and prevent acute respiratory distress syndrome (ARDS). Interestingly, IPPB has recently started to reappear in hospitals.

In 1971, CPAP was officially named as such and its use became fairly commonplace in neonatal ICUs for treatment of hyaline membrane disease (HMD) in premature newborns.

In 1981, CPAP was used experimentally to treat five Australian patients with life threatening Obstructive Sleep Apnea (OSA).1  Prior to this research study, severe OSA was typically treated with tracheostomy. By 1985, over 100 OSA patients were being successfully managed with home CPAP. During the 1990s, developments in CPAP masks increased comfort and usability, allowing it to be used by many more patients.

Today, there are literally millions of CPAP users in the United States alone. Masks and CPAP machines continue to evolve. A miniaturized one-piece nasal CPAP unit hit the market in 2018.

Treatment with CPAP helps a patient return to near-normal sleep patterns and halts progression of associated diseases, if the patient is compliant with use of their prescribed CPAP. Compliance is defined as using CPAP for a minimum of four hours per night, at least five nights of each week. When adherence is suboptimal, determined by downloading the data card installed in the CPAP unit, some insurers refuse to continue paying for CPAP supplies.4

From a public health and preventive medicine perspective, patients with chronic conditions or excessive daytime sleepiness should be evaluated for OSA. When caring for patients with known OSA, EMS providers should inquire about their CPAP use, considering whether their use meets or exceeds the standard.

Prehospital CPAP has also evolved considerably over time. Around 2000, Emergent Respiratory LLC introduced the PortO2 CPAP unit, a yellow shoe-box sized device that delivered CPAP using a proprietary circuit. The Caradyne Whisper Flow entered the market at about the same time, using a similar platform. These early devices employed very large gas flows resulting in rapid depletion of portable and onboard oxygen tanks, and they were extremely noisy which frightened many patients.

The continued evolution of prehospital CPAP led to development of disposable units which were initially powered by high-pressure (40–60 PSI) oxygen outlets, but more recently run off conventional flowmeters.

Today’s disposable units typically deliver CPAP using a venturi flow driver. Current devices cost between $30 to $70; some have integrated nebulizers and pressure manometers. Disposable units are much less noisy and consume far less gas than their earlier counterparts. More recently, disposable BiPAP units have appeared on the market, priced about $20 per unit higher than CPAP.

Although originally intended to treat prehospital patients in pulmonary edema resulting from heart failure, CPAP is now indicated for virtually any condition resulting in significant dyspnea accompanied by signs and symptoms of increased work of breathing. Likewise, in the hospital setting, CPAP indications have expanded to include a wide variety of conditions ranging from the earliest indications in premature neonates to OSA to patients with refractory hypoxemia.

Mike McEvoy, PhD, NRP, RN, CCRN, is the EMS coordinator for Saratoga County, New York, and the professional development coordinator for Clifton Park and Halfmoon Ambulance. He is a nurse clinician in the adult and pediatric cardiac surgery intensive care units at Albany Medical Center, where he also teaches critical care medicine. McEvoy is the chief medical officer and firefighter/paramedic for West Crescent Fire Department in Clifton, New York. He is also the chair of the EMS Section board of directors for the International Association of Fire Chiefs and a member of the New York State Governor’s EMS Advisory Council. He is a lead author of the textbook Critical Care Transport, the “Informed” Pocket References (Jones & Bartlett), and the American Academy of Pediatrics textbook Pediatric Education for Prehospital Professionals (PEPP).

Four years ago I experienced a severe breathing problems. A year later, it worsened and I was diagnosed of COPD. I came across Herbal HealthPoint (w w w. herbalhealthpoint. c o m) December, 2018 and learnt about their successful herbal therapy for COPD. I immediately started on the COPD treatment; i began to notice a reduction in symptoms till it all vanished. I feel better and breath better. I Just wanted to share for people suffering from this horrible lungs disease.