An Argument for BLS CPAP 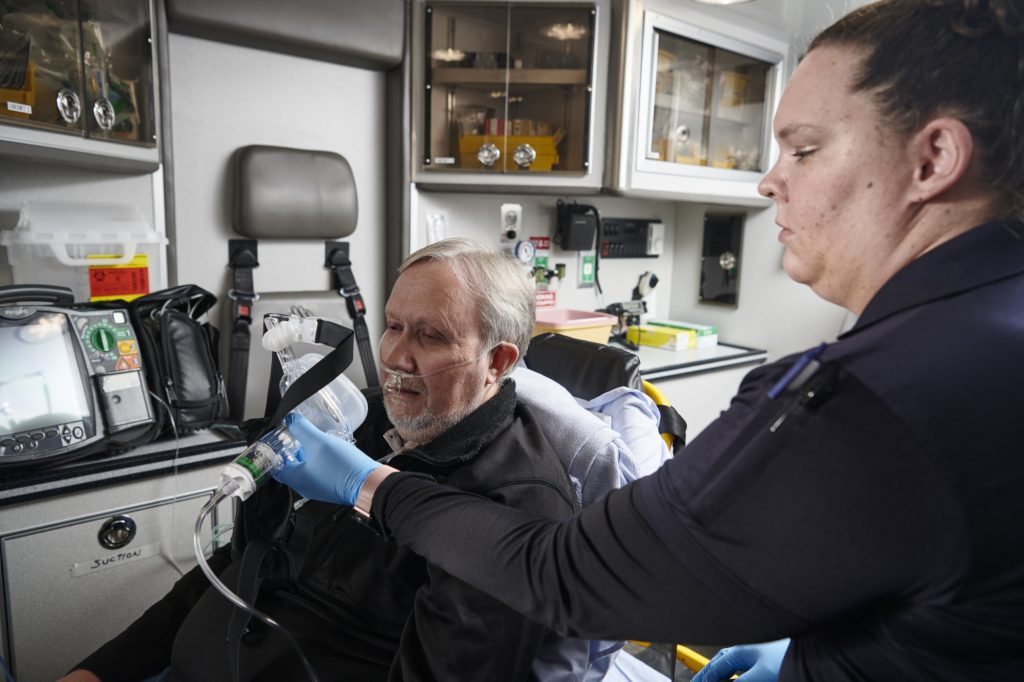 Case 1: Engine 49 and Aid 16 respond to a 58-year-old female with profound shortness of breath, diaphoresis and history of congestive heart failure. Blood pressure is 180/105 mmHg, heart rate is 115 beats per minute (bpm) and respiratory rate is 33 breaths per minute (bpm). Oxygen saturation is 95% on room air. The problem is that you’re 30 miles from the nearest city and 22 minutes from an ALS unit.

Case 2: Aid 7 responds to a 71-year-old male with unexplained shortness of breath patient. He’s weak, and even without a stethoscope you can hear audible respiratory sounds. His blood pressure is 105/85 mmHg, heart rate is 110 bpm and hisu respiratory rate 29 bpm. The patient’s oxygen saturation is 93% on room air. On auscultation you hear rales halfway up on both sides. Expiratory wheezes are also present. He has some ankle edema. Again, an ALS upgrade has a long response time.

That’s the big question in both of these cases: now what? I’m sure all readers will agree that some sort of effective, safe and reasonable treatment that the BLS crews can safely administer is what both of these patients need. Furthermore, the patients need that intervention sooner rather than later.

Fifteen years ago, Keith Wesley, MD, FACEP, FAEMS, (for whom much of this article is due credit) authored an article in the Wisconsin EMS Association Journal titled “CPAP for Everyone.” At that time, “everyone” meant “everyone with respiratory distress.” That statement continues to be echoed today, when continuous positive airway pressure (CPAP) sees widespread use in treating conditions from chronic obstructive pulmonary disease (COPD) to congestive heart failure (CHF).

CPAP has proven beneficial in decreasing the CPAP and COPD patient’s work of breathing and avoiding the need for intubation. This is critically important, as patients requiring intubation are seven times more likely to die from their condition, and their hospital stay is an average of two days longer. This extra time is often spent in the ICU, which carries with it its own unique complications and high cost.

In Washington state, the Bellingham/Whatcom County EMS system, introduced CPAP more than 20 years ago to ALS, resulting in a reduction in the intubation rate of these patients by 30%. Clearly, the key to CPAP’s effectiveness is the simple mechanical effect of reduction of the work of breathing and preventing airway collapse. In addition, depending on the condition being treated, the increased intra-alveolar pressure changes and translocates fluids out of the alveolar space.

For the most part, ALS programs have uniformly adopted CPAP as a critical tool for paramedics. This has been expanded to include the term NIPPV (noninvasive positive pressure ventilation)—which includes both CPAP and bilevel positive airway pressure ventilation (BiPAP). And not only is the use of CPAP supported for ALS, but now is inclusive of trained BLS providers according to the new national EMS scope of practice.

The primary argument in favor of BLS adoption of CPAP is that BLS providers have no other treatment option available to them other than to wait until the patient loses consciousness and requires manual ventilation. Although EMTs in some systems now have nebulized bronchodilators for the COPD/asthma patient, this treatment doesn’t reduce the patient’s work of breathing nor reduce pulmonary edema. Rapid transport or upgrading to ALS are the only options. For many systems, this is neither cost nor patient effective.

For years, we’ve taught BLS providers to provide bag-valve mask (BVM) support for patients, when in reality, they need CPAP. The argument that a BLS provider could simply assist the patient’s respirations with the BVM is a process that’s easier said than done. It takes a skilled clinician to coach and appropriately time this technique, and it’s almost impossible to do, without causing more anxiety and fear, when the patient breathing rapidly and shallow.

It takes much less skill to administer CPAP. Plus, BVM-assisted ventilations doesn’t decrease the patient’s work of breathing—CPAP does. There’s also reduced risk of pushing air into the stomach with CPAP vs. BVM ventilation. BVM-assisted breathing also yields a greater possibility of vomiting and aspiration.

A common argument against BLS use of CPAP is that BLS providers don’t have the critical thinking skills to determine which patient is a CPAP candidate, nor do they have the necessary tools to adequately monitor the patient. No data exists to support this position.

As to the first argument: Although BLS providers may not be proficient in diagnosing the cause of respiratory distress, neither are ALS providers—nor even emergency physicians—during the initial assessment and treatment of these patients. Studies have shown that both ALS providers and physicians misdiagnose the cause of respiratory distress nearly half the time until X-rays, lab tests and old records are obtained. Despite this, patients started on CPAP or BiPAP benefit equally, regardless of the underlying cause. Remember, we’re treating respiratory mechanics not causation.

Determining if a patient is a CPAP candidate isn’t based on heart rate, blood pressure or even pulse oximetry reading, but instead on the assessment of the work of breathing leading to respiratory fatigue. This assessment is a basic skill every BLS provider has. It’s a “doorway” assessment based on level of consciousness (able to follow commands), patient posture (upright or tripod), one-word speech and use of accessory muscles. These are patients that are commonly seen by all EMS providers.

On the other hand, there’s no data that applying CPAP to someone who doesn’t require it causes any harm. In fact, the calming effect of talking to and working with the patient while administering CPAP, may have a synergistic effect on symptom improvement. With the widespread adoption of CPAP in most ALS systems, nearly all BLS providers have seen both its use and positive effect. Once they became comfortable with the device themselves, BLS providers typically readily accept it and began to use it on just about anyone with shortness of breath. Over time, they develop more confidence of when to use it. This cycle of initial hesitation, followed by overuse and then refinement in application, is common among all levels of providers with any new technique or treatment. The widespread ALS use is a benefit, because most BLS providers will have a short learning curve to its effective use, from acquisition to implementation.

To assess the effect of CPAP, BLS providers need only rely on the same work of breathing assessment done initially. There are only three consequences of CPAP administration: 1) the patient remains unchanged; 2) the patient improves; or 3) the patient worsens. In the first two cases, continuation of CPAP is indicated. Obviously, in the third case, the device is removed.

Again, no single objective vital sign is predictive of respiratory failure. Although ALS providers may use capnography to monitor patients giving CPAP, there’s no data that a particular end-tidal CO2 level is predictive of outcome in these patients.

The largest barrier to BLS CPAP adoption used to be addressing BLS protocols dictated by the state. Currently, more than three-quarters of states in the U.S. allow CPAP at the BLS level. In the states that don’t, the new 2019 National EMS Scope of Practice Model includes CPAP at the BLS level. The history and widespread use of CPAP in the ED and among ALS servers, in coordination with this document, should go a long way to overcome state barriers where they still exist.

Case 1: CPAP is applied and the patient experiences a significant reduction in work of breathing. A rendezvous with ALS is arranged, and the time the patient reaches the hospital she is markedly improved.

Case 2: Unfortunately, the patient in the second case didn’t have the option of BLS CPAP. He deteriorated and fatigued. By the time the BLS crew meets up with ALS, CPAP is no longer an option. He’s intubated and eventually ends up in the ICU—not the desired outcome.

Managing the airway is a tried and true mantra for EMS. Today, however, providers are no longer limited to only a bag, or only a tube. We have a great opportunity and responsibility to patients to modify both of these options. The leaders of EMS should assist and encourage the implementation of these improved practices.

Marvin A. Wayne, MD, FACEP, FAAEM, FAHA, is the medical program director for Whatcom County EMS systems in Washington state. He’s also an attending physician in the ED at St. Joseph Medical Center, an associate clinical professor in the Department of Emergency Medicine at the University of Washington, and is member of numerous local, state, national and international organizations on emergency medicine and EMS.