No Longer a Single-Use Tool 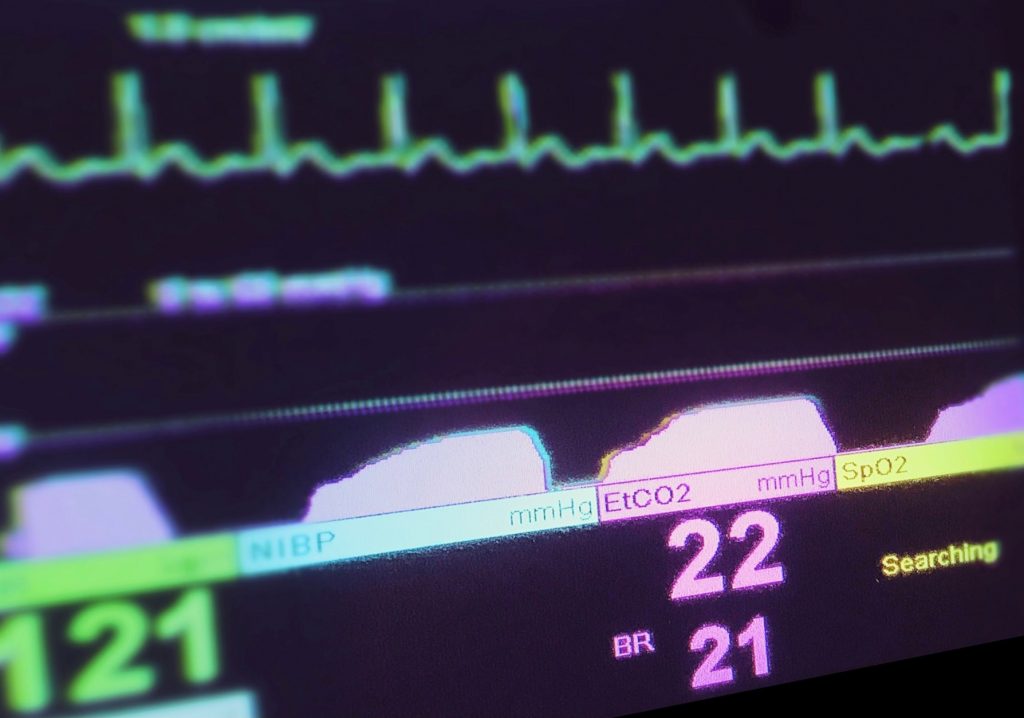 Emergency medical service (EMS) providers are often called upon to care for and treat some of the most critically ill patients. They routinely assess and manage patients with minimal diagnostics and limited resources to make decisions that significantly impact patient outcomes. End-tidal carbon dioxide (EtCO2) capnography is not new to the practice of out-of-hospital medicine; however, the clinical utility extends well beyond airway management. In this case report, we highlight the use of EtCO2 in the out-of-hospital setting to aid in the identification of a specific disease process that led to successful resuscitative treatments based on the EtCO2 values and waveform. Additionally, we discuss the utility of EtCO2 in patients suffering from distributive and hypovolemic shock processes.

The husband of a 68-year-old female patient activated 911 for her altered mental status (AMS). He reports that his wife was recently hospitalized for viral pneumonitis and has substantial comorbidities, including lymphoma on active chemotherapy. The husband reports worsening of her AMS after being on bed rest for the last three days, resulting in a decrease in oral intake. The EMS crew found the patient to be alert and oriented x2 (self, place) with a patent airway, rapid respirations at a rate of ~30/min, and oxygen saturation (SpO2) of 90% on room air. The patient’s radial pulse was weak and rapid at 130 beats/min with an initial blood pressure of 103/63; (MAP 77).

Related: Using EtCO2 to Make the Most of Your Pain Management Care

She is hot to the touch and noted to be febrile with a temporal artery (TA) temperature of 102.8oF. Lung sounds were difficult to appreciate due to persistent talking, coughing, and throat clearing.  The husband states that he has had increasing difficulty caring for her as her mental status has deteriorated from baseline over the last day. The patient was uncooperative with EMS exam and would not follow commands, so a comprehensive stroke evaluation could not be completed. However, a cerebrovascular accident (CVA) was not suspected based on the initial physical exam and findings. 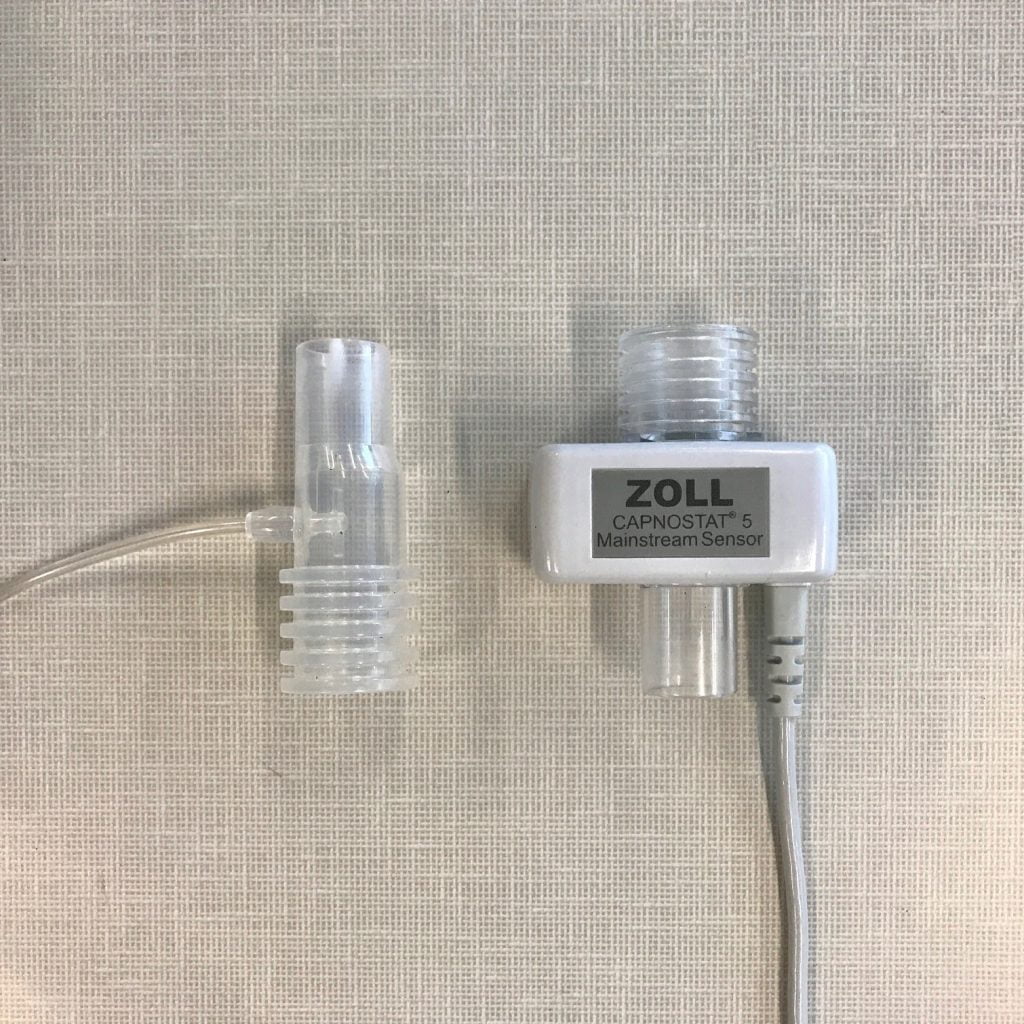 The patient was urgently transferred to the ambulance for further evaluation and management. The cardiac monitor confirmed sinus tachycardia, SpO2 ~90% on room air, blood glucose of 118mg/dL (~6.7mmol/L), and the patient was placed on sidestream EtCO2 with an initial value of 26 mmHg. She was placed on 2Lpm of oxygen via nasal cannula, intravenous access was obtained, and a 250mL bolus of 0.9% normal saline was initiated. During transport, EMS noted a subsequent improvement in the patient’s heart rate (114), SpO2 (95%), blood pressure (150/83 (MAP 105)), and EtCO2 (38mmHg).

On initial evaluation in the emergency department, the patient was found to have a leukocytosis of 24.59, procalcitonin of 0.26, venous lactate of 1.6, and a pH of 7.4. A chest x-ray was performed, which demonstrated an opacification in the left lung base and corresponding small pleural effusion, which was suspicious for a bacterial infection. The patient was successfully treated with IV fluids resuscitation, IV antibiotics, and admission to a tertiary hospital with available medical and oncology services for further treatment.

This case demonstrates the utility of EtCO2 in the out-of-hospital setting to help identify tissue hypoperfusion from a mild shock state. In this case, the initially low EtCO2 could have been reflective of either dehydration (hypovolemic shock) or severe sepsis (distributive shock) based on laboratory findings and response to treatments. The patient had leukocytosis and elevated procalcitonin, likely reflective of the infectious process identified on chest x-ray. These changes were likely clinically responsible for presenting vital signs and mental status changes. With the utilization of EtCO2 in concert with standard prehospital monitoring equipment, these EMS providers were able to identify a state of shock and appropriately intervene with IVF and goal-directed therapy.

End-tidal carbon dioxide (EtCO2) is the measure of the partial pressure of carbon dioxide released at the end of an exhaled breath. Capnography, the measurement of exhaled carbon dioxide (CO2), has become standard in operating rooms, emergency departments, critical care, and out-of-hospital settings. EtCO2 levels indirectly reflect the venous content of CO2 as well as lung perfusion. Capnography also provides information regarding metabolism at the cellular level, tissue perfusion, and gas exchange effectiveness at the pulmonary level.5

EtCO2 is considered the “gold standard” in advanced airway verification and monitoring tool to evaluate high-quality CPR efficacy during cardiac arrest; low values may associated with ineffective resuscitation, while sudden changes in EtCO2 can be indicative of return of spontaneous circulation (ROSC). The EtCO2 waveform has been utilized in concert with a thorough clinical assessment to help identify obstructive respiratory disease processes such as asthma and chronic obstructive pulmonary disease (COPD), as well as response to treatments.9

EtCO2 is useful in identifying cardiovascular compromise and response to treatments in the out-of-hospital setting. In patients with distributive shock from sepsis (defined as >2 systemic inflammatory response syndrome (SIRS) criteria), low EtCO2 values ( <25 mmHg) have shown a 69% sensitivity for sepsis and 90% sensitivity for severe sepsis.7 In patients with hypovolemic shock, low EtCO2 values strongly correlate to elevated lactate levels, worsened base deficit, and hypotension.

Low EtCO2 values can also be indicative of the ventilation-perfusion ratio mismatch that occurs during low cardiac output states and pulmonary embolism (PE).8 In cases of severe trauma, EtCO2 can be an indirect measure of tissue perfusion, an invaluable tool for out-of-hospital clinicians who often don’t have access to lab values like lactate or hemoglobin levels. In patients with severe trauma, low EtCO2 levels can be markers of the presence of hypovolemic shock and inadequate tissue perfusion and acidemia. There is a high likelihood that patients with low out-of-hospital EtCO2 values (< 25 mmHg) may need significant interventions such as aggressive IVF resuscitation, blood transfusion where indicated, and possibly operative management.9,10

Out-of-hospital, it has significant clinical utility to identify shock states and can be a used to give rough quantification to patient response to interventions. Patients with advanced airway devices and obstructive disease processes are part of the spectrum of the patient population that could benefit from continuous EtCO2 monitoring. The presented case demonstrates an example of how EtCO2 monitoring in shock states can be used to guide resuscitation and how improvement of EtCO2 correlates to improvements in blood pressure, heart rate, and tissue perfusion. It is important that EMS systems should continue to expand the understanding and utilization of EtCO2 for all EMS provider levels.

When CPAP Is Not Working
Monitoring the Effectiveness of CPAP
Why PEEP? 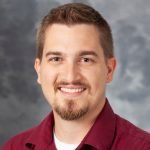