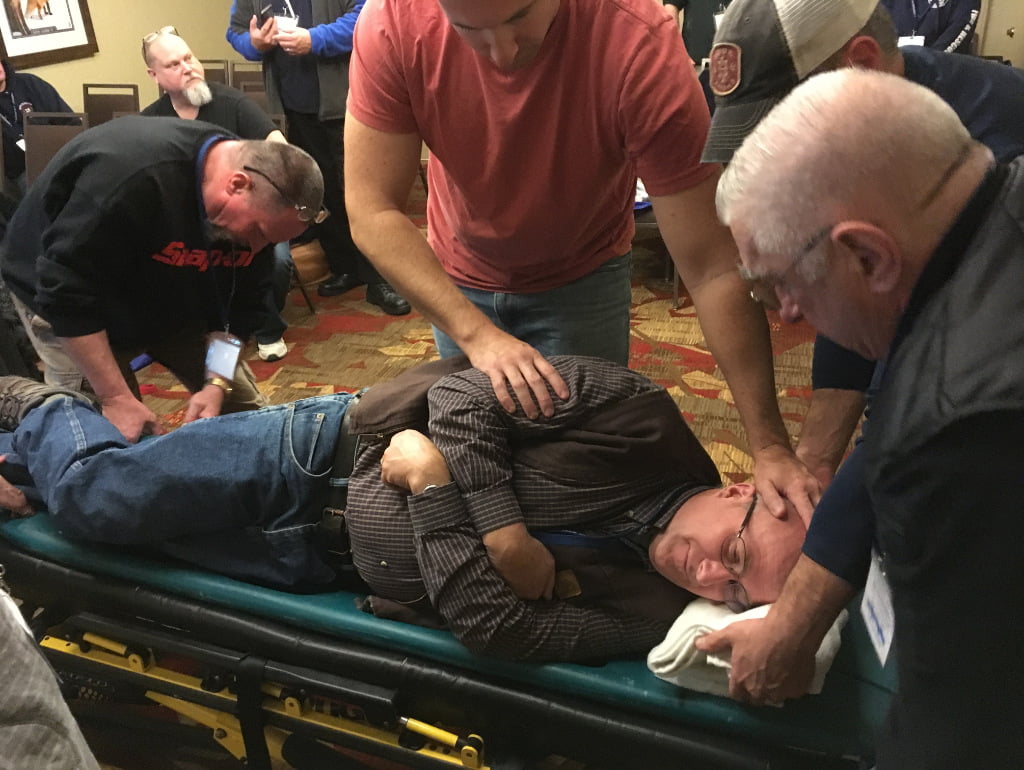 A seldom-used technique that should be in every EMS provider’s toolkit.

“We have a rare opportunity to conduct an airway management observation this morning. B-shift was up pretty much all night and got to bed about two hours ago. I checked on them when I got in, and they were all deeply asleep, and I didn’t have the heart to wake them up. But that doesn’t leave them off the hook, which you’ll see what I mean in a minute. Go get flashlights with a red filter on and meet me outside the bunk room in two minutes.”

“Okay, team, we are not here to prank B-shift, so Dave put the water bucket down. We’re going in as observers only, so try to stay quiet. We don’t want to rob these poor folks of their well-earned sleep.”

“Obviously,” I whispered, “the first thing we notice when we walk in the door is someone is snoring loudly. Since I used to be on B-shift, I know exactly where to go. Lieutenant Brown is a prolific snorer, and there are standing orders to poke him up onto his side if the snoring gets really bad. Don’t worry; this never wakes him up.”

I reach out and push the sleeper on the shoulder up onto his side, which he acclimates to quickly, and his snoring subsides to quiet breathing. We proceed to the next bed and find the occupant lying on her side. I question the team, “how does this individual’s airway look?”

“Her airway looks patent,” says Kelly,” and her breathing is unlabored.”

“Good, let’s check a couple more.” The following two bunks in a row contain an occupant lying on their side. They are all breathing easy, and the last one has drooled on his pillow. I have to stifle the giggling from the team members who find that highly amusing.

Related: The Importance of Head Positioning During Endotracheal Intubation

Once we are in the kitchen, sitting around the table with coffee and donuts, I begin to lead a discussion into what we just observed. “Okay team, as much you know as I hate the Glasgow coma score, what rating would you give the folks we just observed?”

“That sounds right to me. So I think we could agree that these folks can protect their own airway.”

“Well, I do wonder about the lieutenant who was snoring loud enough to shake the building,“ said Sam, “he may be headed to obstructive sleep apnea.“

“Good observation; let’s talk about that for a minute. Would you guys say his tongue was occluding his airway pretty significantly when he was laying on his back?”

“Rolling him up on his side did the trick.”

“What if he was more deeply unconscious?” I asked. “Would rolling him up on his side still have helped keep his tongue from occluding his airway?”

“Absolutely. When he’s up on his side, gravity doesn’t pull his tongue into the back of his throat.”

“So by rolling him up on his side, we’ve made gravity work for us instead of against us. Would that be fair to say?” I inquired.

“Sure, that’s what the recovery position is all about.”

“Right. So tell me the airway status of your other three colleagues that we saw were lying on their side?”

“I’d say they were protecting their airway pretty well, particularly Mark.” said Dave. “I’ll have to make sure I don’t accidentally grab his drool-soaked pillow tonight.”

“Yeah, that was kind of gross but interesting in a way. Not only was he protecting his airway from his tongue rolling back into his throat, but fluids were draining out of his mouth in that position. Would you say that’s an advantage to an unconscious patient?”

“Heck yeah. If the patient’s on their side and they vomit, they’re a whole lot less likely to aspirate vomit or secretions into their lungs.”

“They were free anyway.”

“Yeah, but you get to choose the next one first,” I said, passing the box forward.

Training Tips for CPAP and BiPAP

I continued, “So did you guys know that 60 to 70% of people in America sleep on their side?1 That’s the way they prefer, and from an airway and breathing perspective, it keeps them safe while they’re ‘unconscious’ in this case because they’re asleep. “So if 60 to 70% of people prefer to sleep on their side in their own bed when they’re unconscious, why do we make them lay flat on their back on our ambulance stretcher?”

“Well, it would make our job a lot more challenging for assessment and treatment by not having full access to the chest and both arms for vital signs, and IV access, and stuff,” said Dave.

“You’re absolutely right,” I said, “it would be more inconvenient for us. But maybe there are times that it would be more appropriate for patient care. Particularly patients who are deeply unconscious due to stroke, polypharmacy overdose or whatever.”

“What about trauma?” asked Kelly.

“Good question; let’s get back to that in a couple of minutes. What would you say if I gave you a scenario of someone deeply comatose with a GCS of eight and a 30-minute transport to the hospital? Oh, and her jaw is clenched, so you can’t intubate her. And she’s breathing her own, satting well, with a good ETCO2 reading.

“I guess I could try for a nasal intubation,” said Justin, “but the success rate of that is pretty dismal, so we’d probably just end up assisting with ventilations by bagging with a couple of nasal airways in place. At least until you get us RSI protocols.”

“Yeah, good luck with that.” I said. “So for this patient scenario, what’s another option to laying her flat on her back and assisting her respirations with BVM? Could we transport her on her side to protect her airway?”

Justin replied, “It seems a little squirrely, but maybe because we just haven’t done it in the past. I think in this situation, with a patient who is maintaining her respiratory status, we could manage her airway just by transporting her on her side with suction handy and a nasal cannula giving supplemental O2 if needed.”

“I agree with you,” I said, “and it seems almost too easy. You don’t have to use much adjunct equipment; you’re not putting chemicals into someone’s body to “protect their airway,” with all the potential side effects or adverse reactions. So why are we not doing this now?”

They all looked at me, shrugging and shaking their heads. “Yeah, that was a rhetorical question. Personally, I think there is no reason that we could not start doing this today. No reason at all.”

Kelly challenged, “But what about trauma? If we had to put a person in spinal motion restriction, how could we do that without putting them flat on their back?”

“Brilliant question. And I have an answer for it. I can show you a few studies from Norway about what they call the lateral trauma position, which Norwegian EMS crews often use to immobilize trauma patients.2 Briefly, by putting patients on their side, putting padding between the cot and the patient’s head to keep the head in an in-line position, they are able to enjoy all the benefits of the side-lying position that we just described as far as airway protection. They’ve been doing it for well over a decade, and they have evidence to back it up. Also, if you look in our spinal trauma protocol, it says that if the patient has the potential to vomit/aspirate, spinal motion restriction should be done by placing the patient with their head elevated to the neutral position. So this is something we should already be doing for some patients.”

“Yeah, I don’t think I’d be that comfortable with that.” said Dave. “I mean, I’ve never done it before, so without any training, it could go poorly.”

“Well, I think you just identified our hands-on component of training today. But first, let’s finish up our case study.” I said. “Your assessment leads you to believe that this patient is experiencing a stroke. Her blood glucose level is 120, there is no evidence of overdose, pupils are equal and reactive at 5 mm, and there appears to be passive left-sided deficit. The patient is placed on the stretcher in the left recovery position. The monitor is still attached from the initial assessment. Transport to the stroke center is initiated, and enroute an IV is established in her left forearm. A stroke alert is called in approximately 20 minutes out. On arrival at the hospital, you are led directly to CT scan, the patient is transferred to the scanner via logrolling, report is given, and you head back to the ambulance to prep for the next call.”

“I’ll leave you with this nugget before we get stuff together in the training room. You’ve heard the saying GCS less than eight, intubate. It’s not a rule, but it’s a helpful tool. I made up this: GCS less than nine, patient shouldn’t be supine. It rhymes; therefore it must be true.”

Transporting patients on their side is medically appropriate for unconscious patients who are breathing adequately but may not be able to protect their own airway. It is a non-invasive treatment that can be performed by all levels of EMS provider. It does not require the risk versus benefit consideration of using paralyzing and sedating medication for airway control. It can be used for both medical and trauma patients. It is a technique that is easy to learn, but providers need to be trained on it with hands-on practice. Strap placement, and accessing arms in a side-lying position, and team lifting and placement techniques should be considered ahead of time.

It is puzzling that transporting patients by ambulance in the side-lying position is not widely practiced or taught. This simple technique can have a profound impact on deeply unconscious patients. Diligent attention to the patient being transported in this manner is required, as a significant decrease in respiratory effort should prompt a reversal into a supine position for manual bagging. For suggestions on how to apply the Norwegian Lateral Trauma Position, click here.3 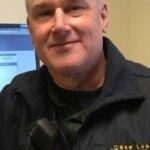 Clay Odell, BS, NRP, RN, is a paramedic-firefighter with Newport (NH) Fire-EMS, and a paramedic for New London Hospital EMS. He is a past state EMS bureau chief, state trauma system coordinator, EMS service chief, and a flight crew member at Dartmouth Hitchcock Advanced Response Team. Clay has been a paramedic since 1985, and a registered nurse since 1997.