Advanced Airway Choice in Out-of-Hospital Cardiac Arrest. Can the i-gel® Make a Difference in Patient Survival? 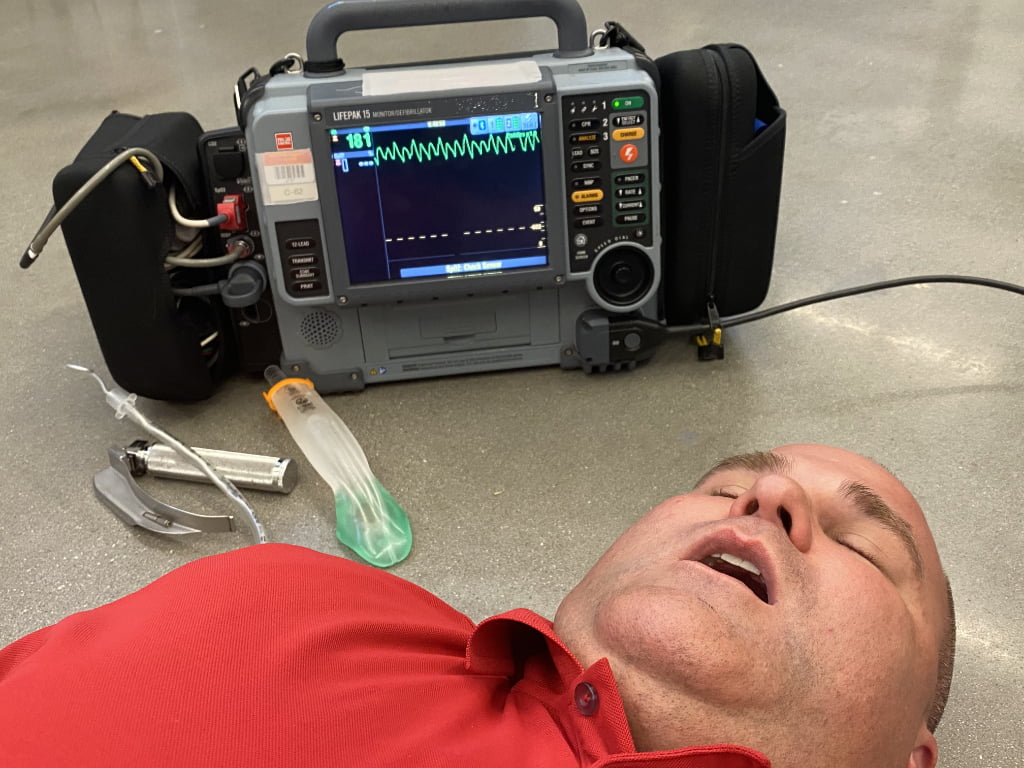 Photo provided by the authors.

Emergency medical service (EMS) crews respond to patients suffering from out-of-hospital cardiac arrest (OHCA) events every day. However, despite the best efforts of EMS crews, less than 10% of these victims survive to hospital discharge, and in some EMS systems, the survival rate is much lower. Determined to improve upon patient survival, a large suburban 911-ambulance system in the southeastern United States modified the treatment protocol regarding how its crews performed initial airway management in the OHCA. This study investigates the transition from endotracheal intubation (ETI) to the i-gel® supraglottic (SGA) airway and the resulting OHCA survival.

The study participants included adults who suffered a witnessed non-traumatic OHCA in which the initial cardiac rhythm was ventricular fibrillation (VF) or ventricular tachycardia (VT ), and the primary airway was the i-gel® SGA or ETI. All patients were from a three-county area of a large southeastern metropolitan area over 60 days. During the study period, the overall survival rate regardless of witness status, bystander-CPR application, or presenting rhythm was 5.8% and was for the exclusion group was 1%. However, 20 individuals qualified for inclusion into the SGA group within this study out of a total of 129 cardiac arrests.

The i-gel® SGA group was compared to a control group of individuals who suffered a non-traumatic witnessed OCHA with an initial rhythm of VF or VT for January 1, 2020, to April 1, 2020, and whose airway was managed by ETI in which 15 (8.5%) individuals qualified for inclusion into this study out of a total of cardiac arrests. Analysis of the data utilized chi-square testing to generate a confidence level (p-value). Chi-square testing showed that there was not a significant statistical association between survival at hospital admission and the switch to the i-gel® SGA, p = 0.324, or between survival at hospital discharge and the switch to the i-gel® SGA, p = 0.639. However, the ease of use, the need for less equipment and training, and the ability of the provider to continue to provide uninterrupted compressions during CPR may be reason enough to recommend the use of the i-gel® SGA over ETI.

Each year, heart disease kills approximately 650,000 Americans and, approximately half of these deaths occur secondary to out-of-hospital cardiac arrest (OHCA).1  Nationwide, approximately 24% of the patients suffering from an in-hospital cardiac arrest survive, while less than 10% percent of those suffering an OHCA survive to hospital discharge.2,3 A key factor in this low rate may be that only 18% of people in the United States have current CPR training according to a 2015 survey.2  In 2019, a large suburban 911 ambulance system in the southeastern United States used data from the Cardiac Arrest Registry to Enhance Survival (CARES), to report an overall 3.6% survival rate after OHCA.

It is important to note that this rate includes all OHCA whether unwitnessed or witnessed, and is independent of initial rhythm or the application of bystander CPR  Determined to improve upon OHCA survival, the service leadership decided to implement changes to its protocol which included patient airway management during OHCA. Pit Crew CPR, which is also being added to the protocol had not yet been implemented during the observation period of this study.

The type of advanced airway deployed during an OHCA is a controversial topic in EMS. Most paramedics are still taught that endotracheal intubation (ETI) is the “gold standard” in prehospital airway management.4 Conversely, second-generation supraglottic airways (SGA), including the i-gel®, offer the advantage of ease and accuracy in its use and shorter training experience.5 Additionally, insertion of the the i-gel® SGA allows for the delivery of continuous compressions during CPR, a factor known to increase OHCA survival. In April 2020, the ambulance service changed the treatment protocol regarding how its crews performed initial airway management in the OHCA from ETI to the i-gel® SGA.

This study reports the results of the transition from endotracheal intubation to the i-gel® SGA airway and the resulting OHCA survival over the first 60 days of use, April 15, 2020, to June 15, 2020. This study compares the i-gel® SGA group to an ETI group (90 days before i-gel® implementation). This comparison was completed using chi-square testing. The study aimed to determine how the change from airway management using ETI to the i-gel® SGA airway affects patient survival in OHCA. It was hypothesized that the transition to the i-gel® SGA from ETI airway management would result in more individuals who suffered a non-traumatic witnessed OHCA with an initial rhythm of ventricular fibrillation (VF) or ventricular tachycardia (VT) surviving at the benchmarks of hospital admission and 30 days post-arrest.

The CARES data was chosen as it is easily stratified using the Utstein template. The Utstein template stratifies arrests by witness status and then further stratifies arrests by initial cardiac arrest rhythm.3 All data collected is local service data, as reported in the Cardiac Arrest Registry to Enhance Survival (CARES) database. Permission to use the data was provided by the EMS service, and no permissions were required by the CARES data sharing committee.8  Statistical analysis was performed using a chi-squared test to generate a confidence level (p-value) using the freeware statistics program Social Science Statistics.

Since there is typically a small window for survival when a person suffers from an OHCA, the American Heart Association indicates five rules to use in predicting OHCA survival. These rules use “5 clinical criteria to predict survival from OHCA: arrest witnessed by a bystander, arrest witnessed by EMS, provision of bystander CPR, shockable cardiac rhythm, and return of spontaneous circulation (ROSC) in the field.”9 With these rules in mind, the data collected for both the ETI and i-gel® SGA groups met the following criteria: 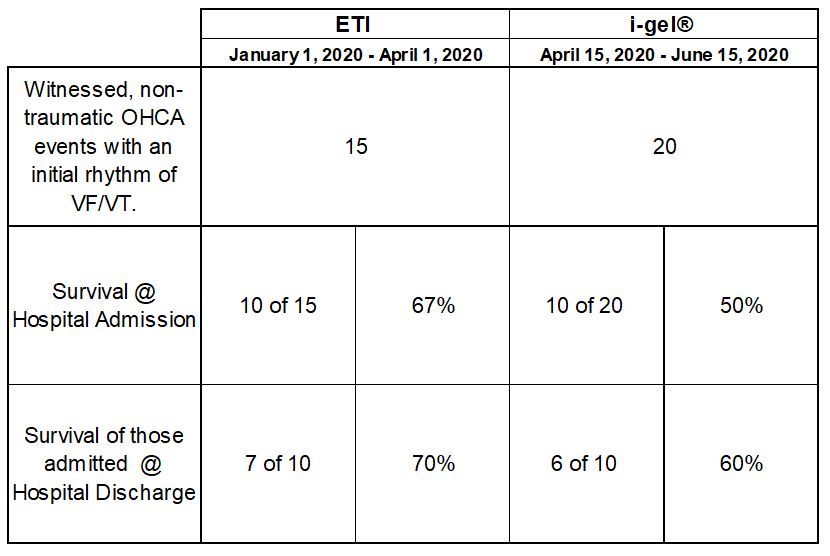 Sudden, non-traumatic OHCA is responsible for over 300,000 deaths each year, and solutions must be discovered to help increase event survival.1  This study’s conclusions support those of the meta-analysis conducted by Wang et al. in which the i-gel® SGA showed no statistical difference in survival to hospital discharge.10 However, in this study, the i-gel® SGA group did show a higher rate of return of spontaneous circulation (ROSC) (50%) than the ETI group (40%). The finding that the use of a supraglottic airway can result in higher levels of ROSC is consistent with findings from both the Wang et al. analysis and those of the Pragmatic Airway Resuscitation Trial (PART).10,11

The PART trial found that the King LT SGA airway device had higher rates of ROSC in OHCA when compared to ETI.11 The higher ROSC rates associated with SGA airways may be attributed to the simplicity of use. This advantage over ETI may allow the EMS crew the ability to focus on other interventions such as continuous chest compressions and timely defibrillation, both of which are known to have positive impacts on OHCA survival.11 Additionally, the increased survival to hospital admission, regardless of airway type, of the six patients suffering a VF or VT EMS witnessed arrest , 66% versus 48%, indicates that EMS providers have the advantage of training and defibrillation resources that a typical bystander does not.

This study was limited by sample size, and the small size of each group may limit the power of this study.12  However, it is essential to remember that this study was a snapshot of the first 60 days of the transition from ETI to the i-gel® SGA. The i-gel® SGA group can be continued to be monitored, and the conclusions of this initial study can be verified or refuted. Moreover, this study did not account for patient comorbidities or bystander comfort or training in CPR.

This study did not show that movement from the traditional ETI airway approach to the i-gel® SGA improved OHCA survival at any benchmark. As there was no improvement in the survival rates, there needs to be more investigation as to what airway management technique can help supplement the delivery of high-quality chest compressions and timely defibrillation as well as increase OHCA survival.

The Miracle of CPAP
Essentials of BiPAP
How Important Is Cuff Pressure? 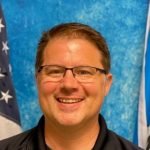 Rob Bozicevich, MPH, NRP, is an EMS educator and EMS academy manager in Georgia. He has been working and teaching in EMS for 16 years. 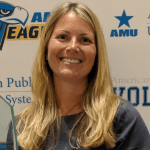 Dr. Jennifer Sedillo is an associate professor of Public Health at American Public University Systems. She earned her doctorate in public health from the University of South Florida. She teaches epidemiology and research methods graduate-level courses.