The Las Cruces (NM) Fire Department (LCFD) fields 170 EMTs, including 46 paramedics, and responded to 19,767 calls for service of which 13,160 were labeled as EMS calls in 2020 in a city of 103,000 people. This observational study concerns 103 out-of-hospital non-traumatic adult cardiac arrest patients resuscitated by those paramedics. The total number of out-of-hospital cardiac arrests in 2020 within the study area was nearly twice the number predicted for the United States per 100,000 people.

In-the-field return of spontaneous circulation (ROSC) at the end of the resuscitation is the endpoint for this study. ROSC occurred in 35% of patients. Asystole was the most common presenting rhythm, followed by PEA (pulseless electrical activity). Asystole was also the most common final rhythm, followed by a perfusing rhythm and then PEA. Emergency response time less than or equal to ten minutes occurred in 91% of cases. Of those responses under ten minutes, 89% of cardiac arrest patients regained a pulse. Over 54% met the criteria for termination of resuscitation in the field. A smaller number of patients in which resuscitation was ongoing without a pulse were transported. 63% had an advanced airway inserted; 40% were endotracheal tubes.

This study reflects the outcomes of a small urban first responder fire department and may expand the information available for such departments in the United States for study and comparison.

The EMS literature has become robust but is still heavily weighted toward larger resource-rich systems in metropolitan areas or university settings. There is a need for reports from grassroots services to allow similar smaller EMS services to have information to study and compare. Few small EMS services have the financial resources, manpower, or time to collect, analyze, collate, and report on specific areas of interest to the broader medical community. Yet the need still exists for this type of information for the greater good of the EMS profession.

Small, focused studies, such as this observational study, have more than just quality assurance value but provide greater value in otherwise unavailable insights into the day-to-day workings of one of many smaller EMS services in the United States.

For many smaller municipal first responding agencies, such as the LCFD, providing high-quality care in out-of-hospital cardiac arrest (OHCA) is an almost daily challenge. In this observational study, ROSC is reported for all OHCA cases resuscitated in 2020 by the Las Cruces Fire Department’s paramedics. This information will help compare other services’ outcomes under similar circumstances and conditions.

The LCFDS serves the city of Las Cruces, New Mexico (population 103,000) and is the first response agency on all EMS calls. The city is served by a contracted private ambulance service that performs the vast majority of transports. With OCHA cases, an LCFD paramedic accompanies the ambulance in transport. LCFD responds to all OHCA cases within the city. The overall staffing of LCFD is 170 EMTs divided into EMT-Basics (66), EMT-Intermediates (58), and EMT-Paramedics (46). The department responded to 13,160 EMS calls in 2020.

All OHCA calls from January to December 2020 were individually reviewed by the author (BD), and data was extracted. The study’s exclusion criteria included age less than 18 years old, traumatic cause for the arrest, and situations where the cause of the arrest did not appear medical in origin. All resuscitations were led by an LCFD paramedic.

No interventions were instituted within LCFD to alter OCHA patients’ treatment before or during the study period.

Data points collected included the patient’s age and sex, response times, whether the collapse was witnessed, the occurrence of pre-EMS bystander CPR, the initial and final documented rhythms, airway interventions, occurrence of ROSC and transport of the patient. 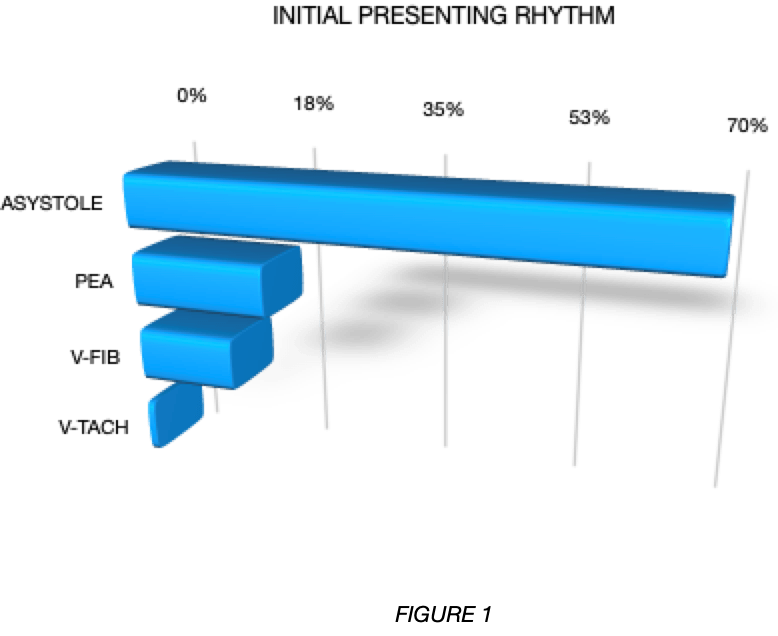 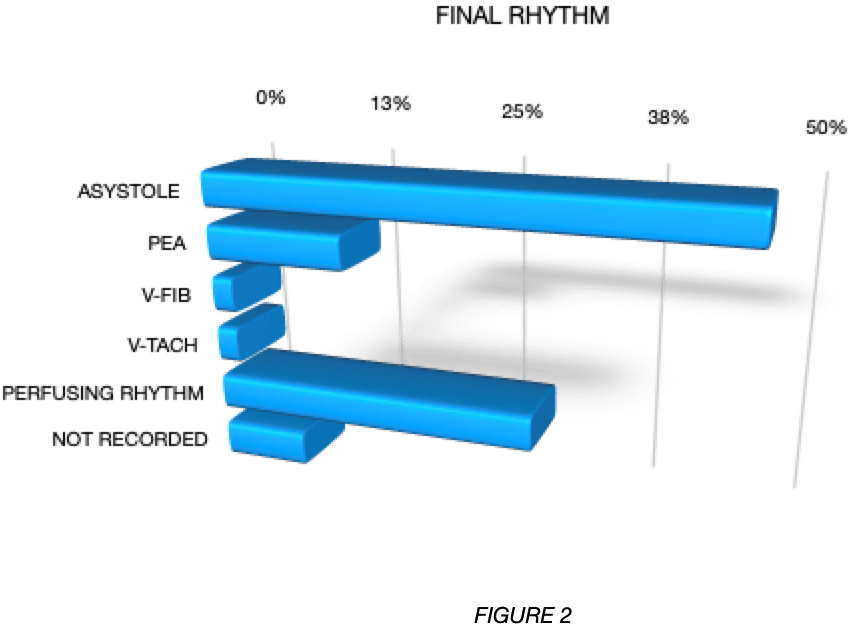 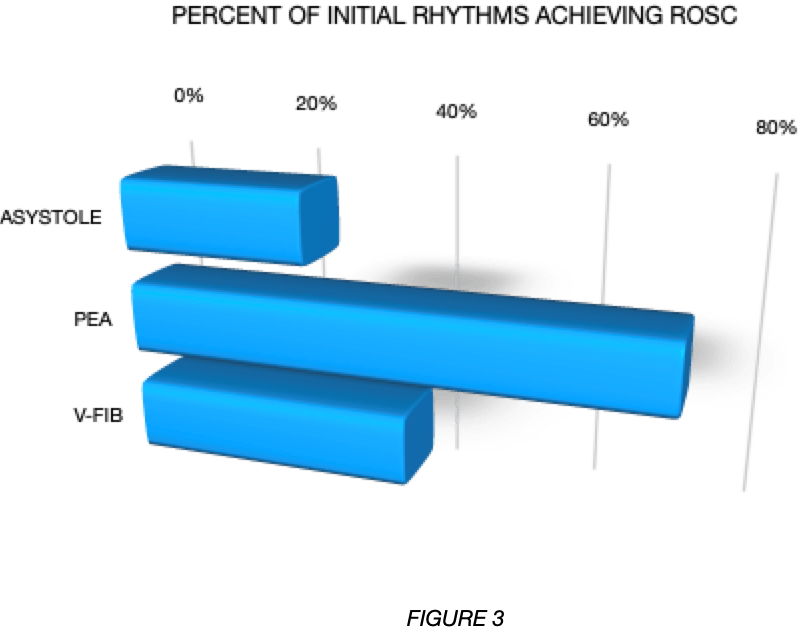 Forty-six percent (47/103) of all OHCA calls were transported, including a small number without ROSC. Of these non-ROSC patients (11 of 103) the resuscitation was initially continued in the emergency department all but once. Patients transported without ROSC did not meet the termination of resuscitation (TOR) criteria, including 4 of 103 (4%) having a persistent shockable rhythm.

ROSC is the outcome endpoint of this study, and by many measures, LCFD is getting the job done in OHCA. The ROSC rate of 35% is modestly above the global pooled incidence rate of 29.7% and well within the wide range of reported rates in another study.1,2 In the field, ROSC is predictive of survival, and the vast majority of survivors of out-of-hospital cardiac arrest are resuscitated successfully in the field.3 ROSC is a crude indicator of potential survival to hospital discharge. For many services like LCFD, there is a lack of collaboration with receiving hospitals making ROSC the only available indicator of successful prehospital resuscitation. It is easily measured and tracked and can be used for comparison between studies on OHCA.

LCFD resuscitates nearly twice the predicted number of OHCA cases per 100,000 population of 55.4 The reasons for this mini epidemic of OHCA has never been studied. According to the Health Resources and Services Administration, Las Cruces and its surrounding county were a medically underserved area in 2020. Also, the underserved population likely suffers from many of the current epidemic maladies of the United States, including diabetes, obesity and uncontrolled hypertension with limited access to medical care and preventive measures. It is worth noting that COVID-19 did not appear to play a role in increasing the incidence of OHCA in 2020. Only one suspected COVID-19 patient appears in this study. In 2019 LCFD dealt with 111 OHCA patients for comparison. 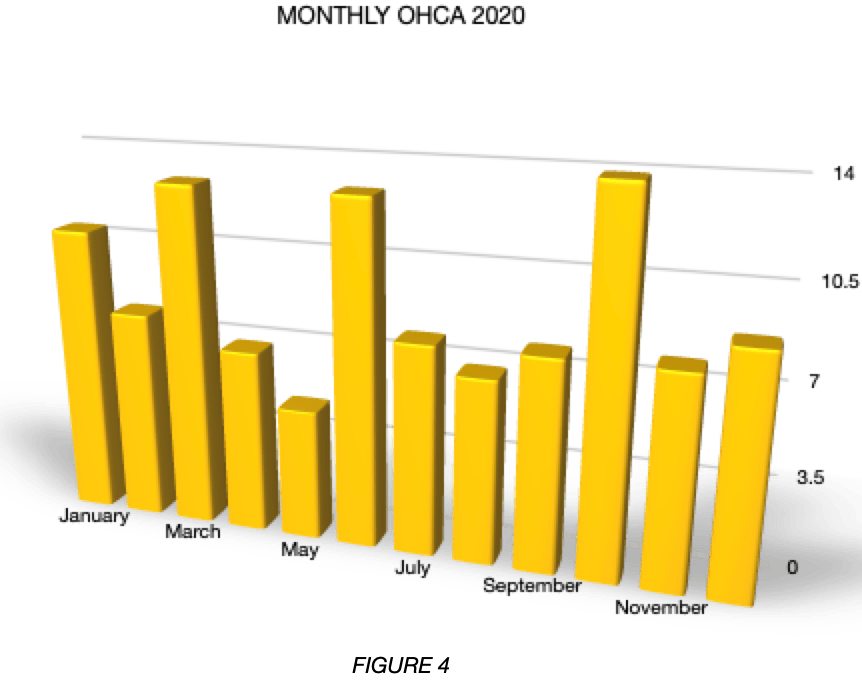 The 2020 LCFD Treatment Guidelines for cardiac arrest allow for TOR in certain circumstances. These include:

– Absence of a final shockable rhythm

– The concurrence of the attending family to terminate resuscitation

The TOR criteria prohibit termination if a left ventricular assistive device is present, hypothermia is possible, or if other mitigating circumstances such as safety support early transport. LCFD’s TOR rate is higher than one reported level for the United States of 40%.5 Using lack of in-field ROSC alone as a criterium for TOR is supported by one study that found its lack resulted in less than 1% survival to hospital discharge.6

TOR in the field is a difficult and emotion-charged decision. There are widely accepted rules for TOR.5 LCFD uses a conservative approach to TOR including features not found in the generally published ALS TOR rule. The concurrence of family members when present is important and generally granted. No patients in this study were transported without ROSC due to family demands.

A small number of cases lacking in field ROSC were transported. Of these, 4% had a shockable rhythm. The remainder failed to meet LCFD’s criteria for field TOR. All but one had resuscitation continued initially in the emergency department.

Whether the collapse was witnessed or not and whether pre-EMS CPR was performed, are two additional independent predictors of ROSC and hospital survival.7 In this study, the combination of witnessed collapse with pre-EMS CPR produced 39% (14/36) of ROSC patients. The witnessed rate of 54% and pre-EMS CPR rate of 39% were consistent with reported rates in a large meta-analysis.8

This is a small study sample from a single EMS system in a single community and the information produced may only apply to a limited number of similar EMS systems in the United States. Nevertheless, this type of information can be valuable to such systems to help with quality assurance measures for study and comparison.

ROSC had to serve as the proxy for hospital discharge survival. In that regard the study is somewhat incomplete. Still, ROSC serves as a valuable endpoint for in-field resuscitation success and as such is not a fatal limitation. Many community EMS systems do not have strong collaborative relationships with their receiving hospitals and the lack of this collaboration is another limitation.

The LCFD is a small first responder fire and EMS agency in a small urban city responding to an unusually high number of OHCA cases in a medically underserved area. This study illustrates the outcomes of the interventions by LCFD. It provides information that may not be widely available on one such system that may resemble many other systems in the United States. Though limited by not having survival data available, the ROSC rate shows a favorable outcome for many OHCA patients resuscitated by LCFD.

Disclaimer: This article reflects the views and opinions of the author and not necessarily those of the City of Las Cruces or the Las Cruces Fire Department.

Support: There was no financial support for this study.

Disclosures: The author has no disclosures to report.

Non-Respiratory Disease Pathologies That May Complicate Airway Management
Choosing the Best Non-Invasive Ventilation Device
CPAP: From the Beginning Until Now 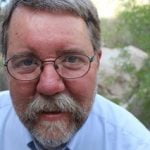 Benjamin Diven, MD, has 36 years experience as an EMS medical director and was previously an EMT in Phoenix, Arizona. He has been medical director for the Las Cruces Fire Department since 2015. This is his fourth medical journal publication.