RSV Treatments for Young Kids Are Lacking, but the 2022 Cold and Flu Season Highlights the Urgency for Vaccines 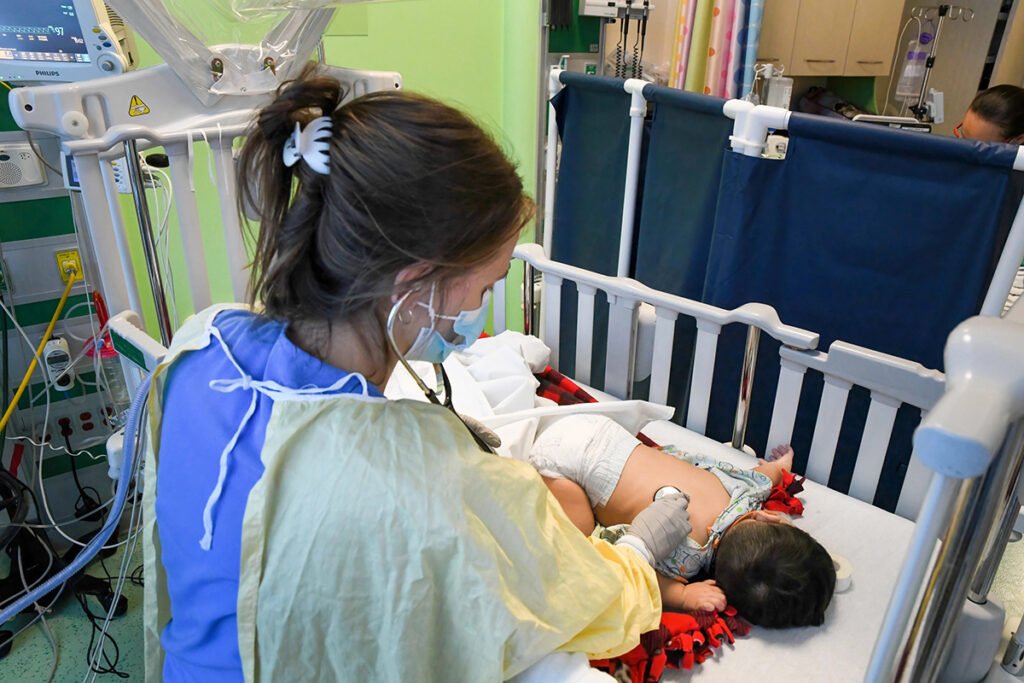 A staff member at Helen DeVos Children’s Hospital cares for Santiago Botello Rodriguez on Dec. 7, 2022. The boy was transferred to the hospital the night before. As RSV overwhelmed hospitals in early December, DeVos Children’s had to decline some patient transfer requests from other medical centers. “I have had many calls come in where they said, ‘We’ve called 15 other places and they’ve all said no,'” says Dr. Andrea Hadley. (Lester Graham/Kaiser Health News/TNS)

(The Conversation is an independent and nonprofit source of news, analysis and commentary from academic experts.)

(THE CONVERSATION) For many parents, respiratory syncytial virus – or RSV – which has been causing record numbers of hospitalizations of children during the fall of 2022, may sound like a relatively new and unheard-of threat. But in fact, RSV is a common respiratory virus that circulates every fall and winter and is a common cause of lung infections in young children.

RSV can be difficult to distinguish from other respiratory infections since the symptoms are common to other illnesses – runny nose, sneezing, congestion, coughing, fever, decreased appetite and wheezing. In most cases, RSV is mild and will improve at home. However, in certain cases, it can cause severe illness and require hospital treatment.

RSV can cause severe infections and pneumonia in anyone, including adults 65 years and older and those with chronic lung or heart conditions or weakened immune systems. But it is most commonly severe in young children.

We are an epidemiologist and a pediatric infectious disease physician and have seen the effects of RSV on children firsthand.

Unfortunately, although RSV is a very common respiratory threat, treatments for it are relatively limited, and as yet, there is no vaccine against it. However, 2023 is likely to be a pivotal year for RSV prevention strategies and treatments.

Current guidelines recommend supportive care, which essentially means managing symptoms and trying to make children as comfortable as possible until they are well again. This includes offering plenty of fluids to avoid dehydration and using over-the-counter medications such as acetaminophen to reduce any fever.

There are a range of medications that have been tried on children with RSV, but for the most part, they’ve shown little benefit. For example, many studies have trialed the use of inhalers and corticosteroid medications, but results have shown that neither significantly reduces the severity of RSV. These medications are therefore not routinely recommended for children to treat severe RSV.

The only drug approved by the Food and Drug Administration to treat RSV is ribavirin, an antiviral medication. It is aerosolized using a special nebulizing machine and needs to be given in the hospital for periods of eight to 24 hours over three to five days. The drug works by trying to stop the virus from replicating in the respiratory tract.

The trials evaluating ribavirin have been small, which means we can’t really be certain of its benefits. Because ribavirin is very expensive and its benefits uncertain, the American Academy of Pediatrics no longer routinely recommends it for treatment of RSV, except for specific cases in very high-risk patients.

Fortunately, most babies and young children with RSV do not require treatment and recover well with supportive care. But some can become very ill and need substantial care from their doctors, parents and family members.

While RSV can result in serious disease for any child, children in high-risk groups face more serious threats from RSV. These include babies less than 6 months old, premature infants, children under 2 years old with chronic lung disease or congenital heart disease, children with suppressed immune systems and children with neuromuscular disorders.

Children may require hospital care if they are having difficulty breathing, have a fever that does not go away after two days, or have lost energy and no longer eat, drink or urinate. This is primarily so they can be monitored and receive intravenous fluids to keep hydrated and ventilators to help with breathing. Approximately 1%-2% of babies less than 6 months old with RSV will be hospitalized.

It’s important to know that children infected with RSV might take a turn for the worse before they get better. This is because, in addition to severe nasal congestion that interferes with their feeding, the inflammation in their airways and lungs may prevent them from breathing properly and keeping a normal oxygen level in their blood. These are the children who end up in emergency rooms and hospitals during the respiratory virus season.

The future of RSV treatment is prevention

Since effective treatments for severe RSV in children are so limited, the primary goal is to prevent the disease from happening in the first place.

One prevention strategy is to treat infants and children who are at high risk of severe disease before they get sick. This includes very preterm infants and those with heart and lung conditions.

A monoclonal antibody called palivizumab can be given as a series of shots and is usually reserved for use during the RSV season. But since RSV has been so variable throughout the COVID-19 pandemic, and in response to the early increase in RSV hospitalizations in children this year, the American Academy of Pediatrics recently updated its guidelines to allow administration of palivizumab whenever RSV is in high circulation.

But to really get ahead of the RSV threat, we believe the health care field needs prevention strategies that can protect all children from the disease from birth.

The promise of vaccines

Despite more than five decades of research, there is still no RSV vaccine available for children. This is because developing a vaccine that really works has been tricky. RSV vaccines target the F protein, the part of the virus that it uses to infect cells, and this protein has different forms before and after infecting the cells. RSV vaccines are in development for three groups, including infants 4 to 6 months old, adults 65 years and older, and pregnant people.

RSV vaccination during pregnancy produces RSV-specific antibodies in the mother that can then cross the placenta to protect the baby. These maternal antibodies generally offer protection for the first six months of a baby’s life. A recent clinical trial showed that RSV vaccination during pregnancy reduced the risk of RSV hospitalization by 82% in infants less than 3 months old. These are very promising results.

Another viable option for the prevention of RSV for all young babies is the use of long-acting RSV-specific antibodies that can be given either at birth or prior to the RSV season. These could provide immunity to infants for several months while RSV is in circulation. A recent clinical trial showed that one of these products, nirsevimab, reduced the risk of RSV hospitalization by 62% in children less than 1 year old.

One positive outcome of fall 2022’s record RSV season is that it has raised public awareness of RSV and created renewed urgency around the need to find more effective preventive strategies and RSV treatments.

The success of these tools and strategies will largely depend on their acceptance and utilization by well-informed parents and providers.

Usually, parents become aware of RSV only after having experienced it in their own family. But pediatric providers know all too well from caring for their patients what RSV can do to young bodies. When parents and providers share these stories, it becomes a powerful testament to the need for preventive strategies to fight RSV.

This article is republished from The Conversation under a Creative Commons license. Read the original article here: https://theconversation.com/rsv-treatments-for-young-children-are-lacking-but-the-record-2022-cold-and-flu-season-highlights-the-urgency-for-vaccines-and-other-preventive-strategies-195700.